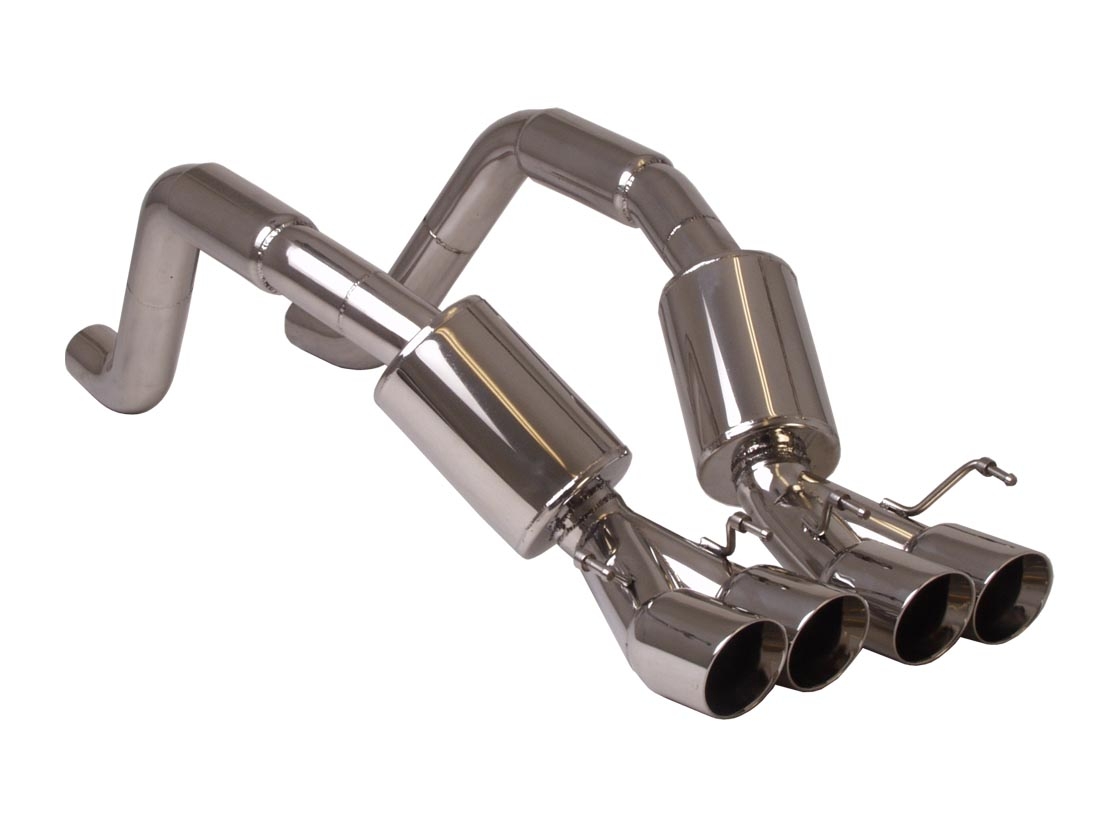 About a decade ago Billy Boat introduced the Bullet exhaust for C5 Corvettes and made it’s mark on the industry. Those wanting a very aggressive, throaty, LOUD exhaust system got exactly that with the Bullets. That system was definitely not for everyone, as it definitely had it’s fair share of complaints for excessive drone inside the cabin. With the release of the C6 Z06 Billy Boat Bullets, has Billy Boat once again created a system to satisfy those wanting a LOUD, obnoxious exhaust note that also sounds fantastic? Here’s my story and review of the Billy Boat Bullet Exhaust for C6 Z06 & ZR1.

Way before I started this website, I was on the hunt looking for different exhaust systems to try on my heavily modified C6 Z06, which was already equipped with a pretty “uncorked” exhaust system to begin with…catless American racing long-tube headers with x-pipe flowing into the original bi-mode 2008 Z06 mufflers.

Initially I switched to the 2011 oem mufflers, which I LOVED.  The 2011 oem exhaust system had a much stronger, sharper tone with the valves open, and it was whisper silent with the valves closed (honestly, it was TOO quiet…with the valves closed it sounded like the engine fell out of the car, just a hum as you go along and that’s it below about 3500rpm’s…the changeover to open valves was much more exciting and dramatic though).  Best of all, it burble & popped like a firecracker like no other exhaust I’ve ever heard on a C6 Z06.  It truly transformed the car for the better, and it was one of the best mods I did to my already modded Z06.  Check out my oem 2011 Z06 exhaust review which I wrote about a few weeks ago.   Here’s what it sounded like from the outside:

“But,” I was seeking a new exhaust that would reduce unsprung weight “and” reduce the drone experienced on the highway when the valves are open at about 1800 rpm’s.

I came to the conclusion that I wanted to try the Billy Boat PRT exhaust system for Z06 & ZR1. From the videos it sounded like it was going to deliver the perfect blend of a burbley exhaust note with slight weight reduction and a focus on drone reduction with Purge Resonance Technology (PRT) built into the system.  This video got me HOOKED on this system, as it made a stock Z06 with Billy Boat PRT’s sound incredible:

I searched the interwebs and found someone selling a Billy Boat PRT system for a Z06. With a little negotiation I sent money to the seller and he sent my new exhaust to my shop. When they arrived I discovered that he sent me the WRONG system. Rather than sending me a Billy Boat PRT exhaust for Z06, he ended up selling me a set of Billy Boat BULLETS for Z06! I was angry, because I kept on asking the seller to make sure he has PRT’s and not Bullets.  But, I didn’t feel like going through the hassle of returning them because I could easily resell them if I didn’t like them.

At first glance I gotta say, this is a BEAUTIFUL system.  The chrome finish looked fantastic, and the tips were beautifully styled and fit the rear end of the Z06 perfectly.  This set came with polished quad 4″ in diameter double walled round tips.  Simple, but aggressive.  Being that this is a simple system with no complex valves or actuators to deal with, the Bullets are LIGHT.  They save an average of 16lbs compared to the stock mufflers!

With a much smaller muffler section than the oem C6 Z06 exhaust, this system was much easier to install than the factory system.  That’s because the large factory mufflers tend to get stuck around the transmission or between the differential and rear diffuser.

So, the moment of truth was about to happen…starting up my heads and cam Z06 with what many claim to be “the most aggressive exhaust system for the C6 Z06 on the market.”  I couldn’t wait to hear it!  The mechanic went into the car and pushed the starter button as I stood behind the car, fingers in ears because I didn’t know what to expect…

I took my fingers out of my ears and look at my mechanic and say “That’s it?”

He asked me immediately “Do you want me to remove the system before we take it off the lift?”

Everybody in the shop at that moment were disappointed.  The car was in fact, idling MUCH quieter from the outside than the oem 2011 mufflers we just removed from my Z06!  I was in shock to say the least.  It was a much, much deeper, smoother idle and not the sharper, higher pitched choppy tone produced by the 2011 oem muffler system when the butterfly valves are open.  And when revved aggressively, it maintained the deep growl but it wasn’t as screaming ear piercing loud as the oem 2011 mufflers. Here’s a video of the Billy Boat Bullet Exhaust System on my Z06 idling and reving:

I told my mechanic I wanted to drive around with them first for a few days so I can get a complete impression of the system before I decided to remove them or keep them.

And then I got in the car…

If you have some sort of manual control of the butterfly valves on a Z06 with headers you know that when you open up the valves you get an increase in exhaust volume in the cabin at idle.  The pressure in your ears goes up slightly.  It’s manageable, but noticeable.  With the Billy Boat Bullets that pressure goes up even more! It’s still manageable, but barely.  You can feel every lope of that cam putting pressure on your ear drums.  It’s not that pleasant, but I kept with the plan of taking it out on the road to give the exhaust a chance to get to my good side.

Leaving the shop I immediately notice the engine does not sound much different than with the stock mufflers when open while shifting through the gears.  BUT, at about 1800rpm’s I can hear the dreaded drone peaking it’s head out.  I’m thinking uh ooo.  As I pass 2100rpm’s the drone goes away and it turns back to pleasant V8 rumble, ever so slightly deeper than stock.  I drove straight to the highway to see if this exhaust produced more or less drone than the 2011 mufflers.

I’m on the highway, about 65mph, put it in 6th gear and…DRRRRoooooonnnnnneeeEEEE.  Like, the WORST drone I have ever experienced, to the point where it was almost as bad as the reaction you get from hearing nails on the chalkboard.  It sucked!  Listening to the radio was absolutely out of the question because the drone was consuming all of the volume my ears could take.  AND, my interior panels were rattling.  I shift back to 5th and the drone goes away and the rattling stops.  I’ve finally experienced this drone everyone talks about.  I completely understand why some people don’t like this exhaust. Here’s a video of me cruising around with the Billy Boat Bullets installed on my heavily modified Z06. NOTICE the weird, distorted noise at 00:04 – 00:07 and after 00:30…that’s DRONE. The camera phone couldn’t capture this too well, but it’s much more intense in person.

Getting on the off ramp I rev match the down shift and I am greeted with much more burbling than the stock exhaust, and that was cool! Although it would have been cooler if those burbles turned into a firecracker pop.  The 2011 oem mufflers do that automatically, especially in 2nd gear…it goes from a little less burble to firecracker-like pops and bangs (that sound like the punches in the movies).  The Bullets burble like crazy, but they don’t finish as pops or bangs.  So that was an adjustment I had to get used to.  Starting off from the stop sign at the off ramp I once again had to hear my interior panels rattle as I passed the drone zone between 1800-2100rpm’s…

I kept the Billy Boat Bullet exhaust on my car for 2 more days.  The drone at cruising speed was simply too much for me to enjoy the car.  They looked absolutely fantastic but in the end there were more negatives than positives with this setup.  The drone and rattling made my car feel cheap and poorly engineered.  And to top that off, my area is plagued with deer that run across the street and eat all my trees in front of my house.  When approaching deer in the Z06 with bullets revving, deer are much slower to react to me.  On the other hand, deer run scared shitless when they hear the first rev of the 2011 oem mufflers.  Proof that one my setup the Bullets weren’t as loud or scary as the 2011 oem mufflers.

I went back to the shop to put my old 2011 oem mufflers back on the car.  It was great to hear firecracker bangs and pops again…I sold those mufflers in less than a week!

The Billy Boat Bullets Redeem Themselves

My friend sells cars for a living.  Lucky for me he recently acquired a bone stock 2008 Z06, and to my surprise, it came equipped with Billy Boat Bullets.  I had to take it out for a test drive!  Fears of painful drone and interior panel rattles shot up my spine.  I turned over the engine and to my surprise the car sounded great!  No ear pulsing vibrations, rattles or deafening drone!

During the test drive I went through the gears, drove it on the highway and downshifted when I could.  This exhaust was much, much, muuuuuuuuuuuuuuuuuccchh more tame than on my car! Although a little drone was still there at about 1800rpm’s, I could still listen to the radio and enjoy a conversation with the passenger.  It was a much better behaved system with stock manifolds & midpipe on the car, delivering a deep, sharp note without rattling interior panels or making my ears bleed.  I still missed the bang and pop from the oem 2011 mufflers, but it still was a significant improvement over the original 2008 oem mufflers.  On this day, the Billy Boat Bullets got a thumbs up from me!

The Billy Boat Bullets For C6 Z06 Taught Me A Lesson

Most importantly, I learned that how your car is setup can greatly influence exhaust drone levels of a specific muffler system. Cars that are radically modified with cammed engines, no catalytic converters & long tube headers can significantly influence how a particular exhaust system behaves on a car. Most exhaust manufacturers design exhaust systems to work with factory exhaust manifolds, catalytic converters and mild midpipes. Change out these parts and you can upset the equilibrium in the system and end up with a car that’s unpleasant to drive or listen to. Choose your setup carefully. Have questions? I’m here to help!

So? Has Billy Boat Built A Legend In the C6 Z06 Bullet Exhaust?

No, not in the standard Billy Boat Bullet for C6 Z06. It doesn’t offer the same obnoxious volume from the outside that made the C5 Billy Boat Bullet Exhaust so legendary across the world.  For owners of stock C6 Z06’s who want a deeper tone to their engine note, this is an excellent choice.  But even in stock form it does exhibit some drone between 1800-2100rpm.  Add this system onto a Z06 with catless headers and be prepared for potentially unpleasant levels of drone and rattling interior panels.  But, some people don’t care if their car drones or rattles at a specific rpm.  If you are that person and you want to get the true Billy Boat Bullet experience, one that gets neighbors to hate you and police to hear you coming from a mile away, there is a solution, and it comes straight from Billy Boat.  I’ll explain in my next post.  If you can’t wait contact us now for more information!